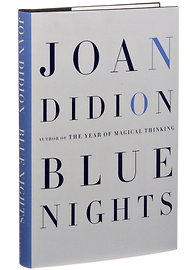 I read Joan Didion’s latest book in one day, pretty much in one sitting.  Once I started there was no way to stop.  Very much like THE YEAR OF MAGICAL THINKING in form, the rhythms and repetitions in this new release will make you feel like you’ve fallen into a gently swirling eddy.  An interesting analogy considering she’s writing about grief and loss.

I’ve always been bothered by critics who dislike her voice, her stance as an outsider looking in on her experience.  They complain there’s not enough of her in the story, that she’s too remote and cold and distant; that, for an essayist, she doesn’t give nearly enough.  I would argue this slight remoteness of voice is what draws me into the narrative.  It’s magnetic.  I believe her.  I trust her.  I’m invested in what she has to say because I feel the friction in her voice.  In her last 2 books, for example, she’s writing about her grief and emotions and failings and pains without falling into a soupy mush of sentimentality.  And at the same time I can feel her resistance to revealing so much about herself.  This tension is what makes it work.

Many a memoir writer could take a lesson from Joan Didion.

What did I like most about BLUE NIGHTS?  It’s rumination on guilt-infused grief.  Many reviewers have focused on the constant repetition and the narrative shift: that the story opens with Quintana at its center, but ends with Joan’s contemplation of her own aging.  I see something completely different.  This is, simply, a story of mothers and daughters.  It opens with Joan’s focus on her maternal guilt; her worry that she was never a good enough mother, that somehow, in putting her career first, she left Quintana too often alone and uncared for.  It ends with Quintana’s guilt that she, in her early death, will leave her frail and aging mother alone and uncared for.  And time runs out before either of them has the chance to get it right.

I’ve read as much press as I can find on BLUE NIGHTS.  Here are the only 2 not to miss:

Nathan Heller’s article in The New York Times Magazine.  Heller doesn’t merely review the book, choosing instead to discuss the paradoxes in Joan’s writing style.  “To readers who admire her work, she is a journalist of rare candor and style, a writer who unflinchingly peels back the smooth surface of public narrative and the skin of her own psyche, opening both to scrutiny and giving magazine writing a lambent glamour in the process. In the eyes of less enthusiastic readers, she’s a histrionic prose artist, striking poses of stylish despair in precious, incantatory sentences and drawing ominous conclusions from a Ouija board of ironic detail.”

And NPR’s Fresh Air interview with Joan Didion.  I encourage you to listen.  Listen to this voice for yourself.  You won’t be disappointed.

(If you don’t have time for either, there’s a very good short interview here, at The Washington Post.)