What’s your name?
Who’s your daddy?
Is he rich like me?
Has he taken any time
To show you what you need to live?
~ Time of the Season, by The Zombies

When I was 20 and working as an ingenue legal secretary in the big city, one of the lawyers used to give me his dictation tapes with an embedded quiz.  “Name this tune,” his voice said one day, at the close of his Chapter 13 bankruptcy letters.  I heard the above song and could not place it.  I had never heard of The Zombies.  Mr. Lawyer thought this was a hoot.

Mr. Lawyer, who eventually became my first husband.  (but I digress) 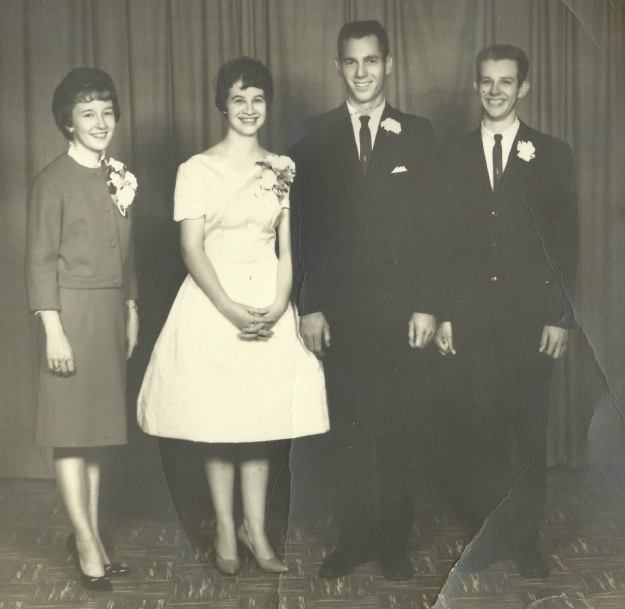 That’s him, my birth father, on the far right. I think I recognize my big smile?

I’ve often said I met my daddy, my birth father, at my mother’s funeral.  This is a half truth.  I have a small memory of meeting him right after I turned 18.  I remember feeling bold.  I remember calling my Grandma Wilma — with whom I’d had a little contact over the years — and requesting a meeting.  I remember being painfully nervous to meet him, for days and days before.  I remember walking into Grandma Wilma’s living room and seeing him sitting on the couch.  Like a ghost.  My ghost as shocked to lay eyes on me, as I was to lay eyes on him.  I have no idea what we said.  I don’t remember what he looked like, don’t recall his voice, his smell, his touch.  Did I hug him?  Him, me?  I can’t recall.  All I remember is standing in the backyard with his wife while she told me how much he wanted to know me.

After that meeting, I never heard from him again.

Until he showed up at my mother’s funeral.  I was 36 years old.  “That’s your dad!” Aunt Mary had said of the strange man pacing in the back of the room, between the aisles of metal folding chairs.  My dad, who bravely walked toward me and my mother’s casket and handed me his business card after writing his home phone number in blue ink on the back, and said, “I’m so sorry about your mom.  Call us next time you’re in town.”

I never called.  Never heard from him again.

My memoir is mostly about mothers.  All of my mothers while growing up, real and step and grand and otherwise.  But the fathers are (interestingly?) absent.

Do you know your father? 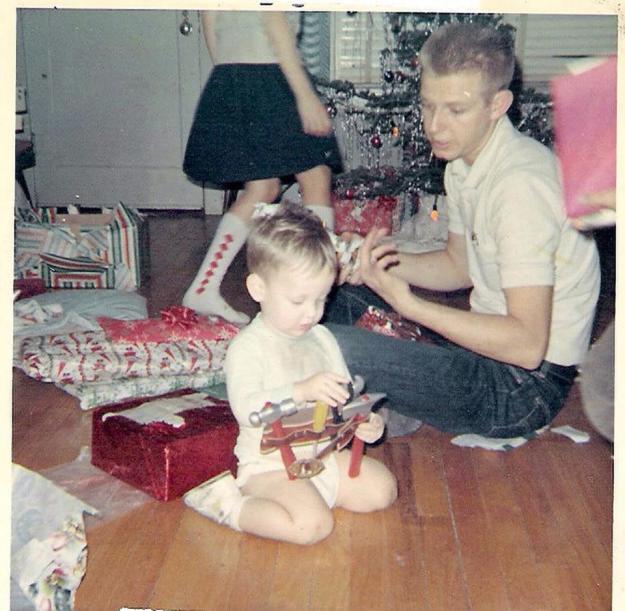 Here’s my dad at some Christmas, with some child.

My father’s youngest brother (with whom I’m FB “friends”) recently posted some old photos, many of which are of my dad.  I frantically (not even remotely an exaggeration) downloaded every photo and  clicked on these photos (obsessively, you could say) and enlarged them, zeroed in on them, dying to find something, something, something, mygodcomeonsomething, anything, to find a resemblance.  To find myself?

What’s your name?  Who’s your daddy?  Tell me your story.