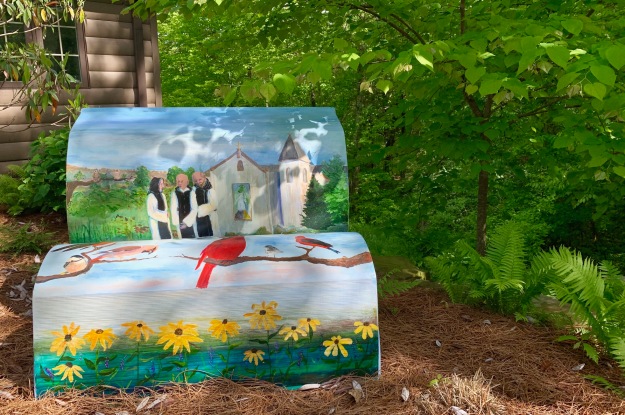 The Saturday before Easter, at a standing-room-only nail salon here in town, the lady in the pedicure chair next to me spent her hour proselytizing and inviting woman after woman to Alton Baptist for Sunday services.

The women were unflinchingly polite, saying things like “thanks, but we live in Lexington,” “I used to live here, I’m all set,” and “I have plans with my grandkids,” but they were also clearly annoyed. To no avail. They were trapped in their chairs, nowhere to go.

I recalled this awkward Easter Saturday when I read a recent column by Kristina Dreisbach about our wonderful coffee shop on Main Street. Ms. Dreisbach is right about the perfect coffee and the tasty food. But unlike Ms. Dreisbach I go there in spite of, not because of, the abundance of Christian quotes and quips that adorn the walls.

I do not begrudge the owner of the coffee shop for decorating her place of business any way she sees fit. This is her right, and I respect it.

And yet, I frequent the coffee shop … for coffee. And I am not alone.

A Lawrenceburg woman explains how she finally changed dentists because the she no longer cares to hear about Bible study while lying back vulnerable in the chair, unable to speak.

A friend’s niece wants desperately to get married in the church she grew up in, but she also wants to have a father-daughter dance. The congregation votes no. The niece gets married elsewhere. My friend is angry and hurt. She wants to change churches, she says. But in the end she stays and stays silent. She realizes that, if she leaves, she will be ostracized by the only community she has known since birth.

I hear about how, in order to receive food at the local pantry, people are often asked (read: required) to pray aloud, like a beggar, in front of everyone.

A man stops me on the sidewalk to relate a story about the swearing-in ceremony of a newly elected official wherein the official said, “I’m going to say The Lord’s Prayer, and anyone who doesn’t like it can go outside.”

We talk a lot about freedom of religion, but do any of these stories sound free?

Many businesses here in town display Bibles, play Christian music over the loudspeakers, talk openly about vacation Bible school and their Bible study groups, hang signs on the walls with Christian sayings and verses. Women proselytize to a captive audience at the nail salon.

I wonder, would we just as gladly and comfortably give our business to an owner if that person were Muslim? If the workers dressed in hijab and asked us to join them in an Islamic prayer? If their walls were adorned with Buddhist or Atheist sayings? If they played Hindu music over the speakers? If they wrote a weekly column on Orthodox Judaism in this newspaper?

In his December 2018 column in the New York Times, evangelical writer Peter Wehner wrote, “If you find yourself in the company of people whose hearts have been captured by grace, count yourself lucky … You don’t sense hard edges, dogmatism or self-righteous judgment from gracious people.”

Dogmatism is defined as the tendency to lay down principles as incontrovertibly true, without consideration of evidence or the opinions of others.

Our country was founded on freedom of religion. Our founders escaped the hammer blows of conformity by the Church of England for the colonies, and “freedom of,” it seems, means the freedom of all personal choices, which certainly includes, but is not exclusive to, Christianity.

Here’s to practicing tolerance with grace. May we all be more respectful of, and more open to, the many views and practices of our neighbors.